skip to main | skip to sidebar

When it seems every river in the state is blown out or about to be, it's nice to see that the North Fork of the South Platte is still in great shape. And fishing at Rowdy Trout Ranch has been Lights Out!

Thursday I fished with a couple serious outdoors-men from Wisconsin. Both were serious fishermen, but this was their first fly fishing adventure in Colorado, and I'd have to say it was a resounding success. 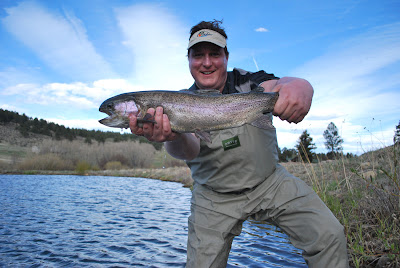 Don't let John's big Bear paws fool you, that fish stretched the tape at over 26" long!

Not to let his boss outdo him, as soon as John landed the monster above, Joe hooked one of his own. 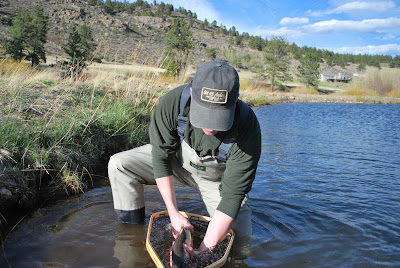 If you're looking for some fishing during runoff there's a chance the North Fork will be in shape and Rowdy Trout Ranch will be fishing well. So give me a call and lets spend a day at Rowdy that you won't forget!
Posted by Mark at 6:52 AM No comments:

Sick as a dog, but desperate to get out of the house, I decided to make a quick run down to Deckers Wednesday afternoon to fish the South Platte below Cheesman Canyon. As I got about 10 minutes outside Denver the drizzle turned into an outright deluge and then came the hail. The hail stones pounding my tin can of a pickup made an absolutely deafening ruckus. The highway was covered with about 2 inches of white by the time it stopped. As I weaved my way into the mountains I passed through a few more storm cells and a lot more rain before finally reaching the river.

When I got there I was surprised to see that Horse creek was not puking mud into the Platte. So I suited up, ate a sandwich and walked down to the water. Standing on a high bank I could see several fish spread out on the shallow flats darting back and forth. I watched them for a few minutes and spotted a few fish sporadically rising to the surface. As I slowly made my way to the water I could see a handful of clumsy BWO mayflies fluttering off the surface of the water. So I rummaged through my boxes and picked out a nice looking dry fly, rebuilt my tattered leader and set about to catch a fish.

And catch a fish I did. A nice brown. Then another. And within an hour had caught a handful of nice browns - all on the dry. As I finally got to the top of the pool I was fishing, I spotted a few larger rainbows sitting on the shelf where the riffle above dropped into the pool. They were sitting in about 18" of water and despite the choppy water over the top of them you could clearly see them darting around to pick up food from the drift. I spent several minutes trying to coax them up to my dry before finally conceding that these fish would probably be easier to catch if I tied on a dropper. So I dropped an egg off my BWO dry and after just a minute or two was hitched up to a really good rainbow.

As I worked my way up river I watched a procession of cars leave. "Strange" I though, as I spotted fish in every corner of the river I peered into, some of which I even managed to catch. But then it hit me. At first I figured it was the deeper water I was fishing that made spotting the fish harder, or maybe my glasses had fogged up. But when I took the glasses off it was suddenly apparent. In front of my eyes, the river was starting to blow out. Over the next 10 minutes the clarity continued to drop until it looked like Guiness pouring from a tap. It was about then I decided a beer sounded really good and it was time to call it a day.
Posted by Mark at 11:25 PM No comments:

Thursday was one of the nicest days I have seen in South Park in a long time. Not a cloud in the sky, mid 60 degree temps and even the wind was pretty light. The fishing wasn't too bad either. I guided a gentleman from Denver who certainly knew his way around a fly rod and we had as much fun as a beautiful day like that deserves. We spent the morning on the "Dream Stream;" the water was very low and clear which made fishing tough, but we still managed to find one really nice fish. 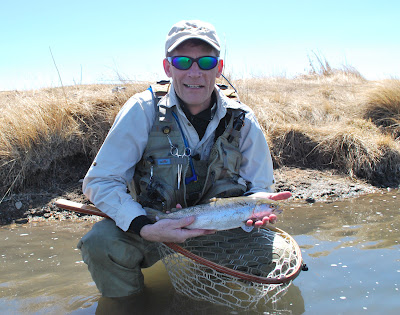 In the afternoon we made our way over to the Tomahawk lease on the middle fork of the South Platte. At 25 cfs runoff has definitely not hit this stretch yet, and it was also very low and clear. But that didn't seem to bother the fish much. After eating a quick lunch we hit the river just in time to catch a descent BWO hatch and hooked several fish on dry flies. As the surface activity slowed down a dropper added to the bend of the dry accounted for much of the action. Eventually we finished off the day nymphing the deep runs and pools with a Pheasant Tail and a Nuclear Egg and the fish started slamming the egg. We had a ton of fun and hooked a bunch of fish, all while enjoying a beautiful Colorado spring day.

If you're on the fence about taking a guide trip, now is the time before runoff blows the rivers out.
Posted by Mark at 5:29 PM No comments: 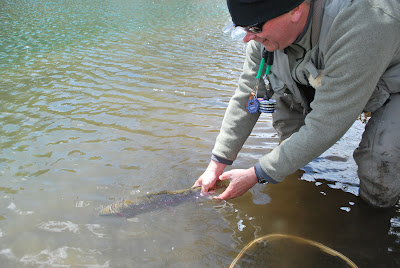 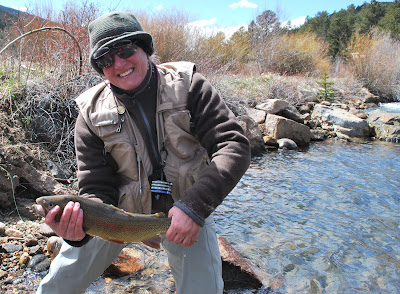 The weather report called for some serious nastiness on Saturday for the first Anglers All "On-Stream" school of the season. So we ended up with a few cancelations, but the three brave souls who stuck it out and attended the class were treated to an awesome day when the weather turned out to be much better than predicted. The day was a mix of formal instruction to learn about the fundamentals of fly fishing and puting those skills to work on the pond and the river.

Everyone had a great time - myself included - and several very nice fish were caught. Two of our students enjoyed getting their waders wet for the first time and catching their very first trout on a fly rod. All in all, everyone learned a lot about fly fishing and had a very memorable day.